E-mail conversations are often relatively informal and the participants, especially when they are not lawyers, can take prior discussions as a “given” rather than fully and expressly repeating them to ensure they have legal effect.

Recently, in I.D.H. Diamonds NV v Embee Diamond Technologies Inc., 2017 SKQB 79, the Saskatchewan Court of Queen’s Bench considered the legal effect of such informal e-mail discussions and whether they could be relied upon to be an acknowledgment of a debt so as to extend a limitations period under Saskatchewan’s The Limitations Act (the “Act”).

Mr. Justice Layh held that debt may be considered to have been acknowledged even if not expressly referenced. In addition, emails can satisfy the formal requirements that such acknowledgments be in writing and signed.

In February 2011, Embee Diamond Technologies Inc. (“Embee”) purchased 352.73 carats of raw diamonds from I.D.H. Diamonds NV (“IDH”). A deposit was to be paid on delivery of the diamonds with the balance due and payable within 30 days of delivery.  The initial deposit was paid in March 2011 and another small payment made a year later but since 2012 Embee had made no further payments. After approximately three years of discussion and e-mail correspondence, it became evident that Embee could not repay the sum it owed to IDH.

During the course of the three years, the e-mails sent by Mike Botha of Embee generally took the form of an update on Embee’s efforts to obtain financing.  In various emails, Embee would make statements such as “I am doing whatever I can to pay you as soon as possible” or “your money will be transferred the moment it is available” or “Financing is still underway …”.  Some emails referenced paying “the amount owing to IDH” and some did not.  Some emails were in response to inquiries from IDH about when it would be paid.  Generally, references would be to “the funds” or “the money”, without any specific reference to the amount of the debt or source of the obligation.  There appear to have been at least two dozen emails exchanged along those lines during the three years.

On September 11, 2015, IDH sued Embee to recover the money it was owed. Embee argued that IDH’s claim was statute barred by the two year limitations period set out in the Act.

The court was faced with two main issues: 1) whether the debt had to be expressly mentioned in a communication for it to be an acknowledgment of the debt, and 2) whether the emails satisfied the requirements of the Act of being “signed” and “in writing”.

The relevant portions of section 11 of the Act state the following:

11(1)  If a person acknowledges the existence of a claim for payment of a debt … the act or omission on which the claim is based is deemed to have taken place on the day on which the acknowledgment was made.

(2)  For the purposes of subsection (1), an acknowledgment:

(b) must be made, before the expiry of the limitation period applicable to the claim, to the claimant … .

The first requirement under s.11 is that there be an acknowledgment of the debt owed. Embee argued that the e-mails were not an acknowledgment of debt as no e-mail had mentioned the exact amount owing within a two year period. Justice Layh rejected that, taking a much more pragmatic approach that took the broader circumstances into account:

[30]       The above series of e-mails satisfies me that Mike Botha repeatedly acknowledged the existence of a debt. As advised by Maher D.C.J. in Gilroy, I have looked to the circumstances in which the e-mails were exchanged and have construed Mr. Botha’s e-mails in the way he intended I.D.H. to construe them. Mr. Botha never intimated anything but an ongoing debt obligation.  He often reassured I.D.H. that payment was imminent.  He offered different arrangements to see if Embee’s obligations might be satisfied.  I see no need for Embee to have acknowledged a specific quantum of debt …

Thus, the Court concluded that, through the ongoing e-mail discussions  wherein it was clear what debt or commitment or obligations were being referred to, the nature of the emails suggested a continual acknowledgement of the existence of a debt owed by Embee to IDH.

Given that reasoning, it appears that Saskatchewan’s courts can be expected to take a practical approach to the evaluation of broader context in determining whether debts have been acknowledged under section 11 of the Act.  The types of email exchanges that occurred in this case are now the norm, rather than the exception, for how business parties communicate with one another about these sorts of issues.

The Formal Requirements: “in writing” and “signed”

Section 11 of the Act also requires that an acknowledgment of debt be “in writing” and “signed.”

The “in writing” requirement was easily satisfied because The Electronic Information and Documents Act, 2000 (Saskatchewan) (“EIDA”) provides as follows in section 8:

(a) is in an electronic form; and

(b) is accessible so as to be usable for subsequent reference.

Justice Layh held that the e-mails were both in electronic form and accessible as to be usable for subsequent reference and thus met the “in writing” requirement of the Act.

With respect to “signed” requirement, the emails sent before mid-2015 contained two things to identify the sender. First, there was the normal name, title and address information that is included at the foot of emails sent by many business people, as follows:

Second, immediately below that address the emails consistently included the following (which essentially would be logo images for Embee):

Embee argued that it had adopted formal electronic signatures for its officers, such as the following (which was not used in an email with IDH before 2015, by which point the limitation period would have expired if the “signatures” depicted above would not be considered to have met the Act’s formal requirements): 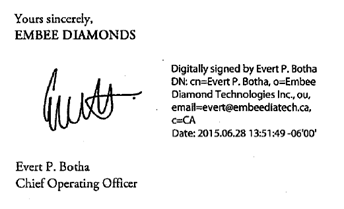 Thus, the core issue was whether a name and address “box” combined with a logo, as used in everyday emails, would meet the “signed” requirement.  Section 14(1) of EIDA states the following about electronic signatures:

EIDA defines “electronic signature” as “information in electronic form that a person has created or adopted in order to sign a document and that is in, attached to or associated with the document”.

In evaluating whether an ordinary email between two parties would be considered to be “signed”, Justice Layh looked to the purpose of the requirements for signatures, being identification of the person who was sending the document (identifying the source and authenticity) and establishing the sender’s approval of the document’s contents.  After review of some case law, he concluded that even absent specific legislation concerning electronic signatures, courts have treated electronic signatures as valid under longstanding common law principles, similar to other modifications such as crosses, initials and rubber stamps.

Justice Layh outlined four requirements that were satisfied by the emails sent by Embee:

The Court held that Embee’s emails to IDH satisfied those conditions and left no doubt as to their authorship or authenticity.  In particular, the Court pointed to the consistent presence of the normal name, title and address information and the “logo” image with the diamond images and the “Sirius Star” words.

Embee’s use of more formal digital signatures on two other documents (one letter in 2012 and one email in 2015) did not persuade the Court in any way that the lack of formality on the everyday emails established a lack of authenticity or intention to disavow the contents of those emails.  Rather, the Court stated:

[63] … I find the series of emails bear several items of information and indicia to establish that the contents were created or adopted by Mike Botha. Several distinguishing features of the emails, including a registered trademark and the repeated designs and phrases are proof of their authorship. Nor has Embee suggested that it did not author any of the emails.

As a result, the emails were held to be “signed” and “in writing”, and to have created a continual acknowledgement of the existence of the debt.

We have learnt that this decision is under appeal and the appeal is set to be heard in mid-September.  We will keep you apprised of any developments as they become available.

This publication is provided as an information service and may include items reported from other sources. We do not warrant its accuracy. This information is not meant as legal opinion or advice.

Miller Thomson LLP uses your contact information to send you information electronically on legal topics, seminars, and firm events that may be of interest to you. If you have any questions about our information practices or obligations under Canada's anti-spam laws, please contact us at privacy@millerthomson.com.

© 2021 Miller Thomson LLP. This publication may be reproduced and distributed in its entirety provided no alterations are made to the form or content. Any other form of reproduction or distribution requires the prior written consent of Miller Thomson LLP which may be requested by contacting newsletters@millerthomson.com.