This posting was authored by Katherine Xilinas, Miller Thomson LLP.

In the early 1970s, the United Nations Conference on Trade and Development recommended that developed nations grant non-reciprocal duty reductions in respect of importations of goods originating in developing countries in an effort to promote their economic growth and export diversification.  Accordingly, since 1974, Canada has had a federal policy of extending preferential duty rates to importations of goods originating in developing countries, known as the General Preferential Tariff (“GPT”). Most developed economies, including the U.S., the European Union and Japan, have similar programs.  In contrast with the benefits arising under its various trade agreements (e.g., NAFTA), Canada is not under any obligation to continue GPT benefits, which are subject to review and change from time to time.

The current GPT covers approximately 175 beneficiary countries, including almost all non-OECD countries, and covers over 80% of tariff items, including many manufactured goods (notable exceptions include clothing, footwear and certain agricultural products).  To be eligible for GPT, over 60% of the value of an imported good must contain inputs from GPT beneficiary countries or Canada.  Further, goods are entitled to the GPT only if they are shipped to Canada directly from a beneficiary country.

The GPT, which is legislated under the Customs Tariff, is reviewed every 10 years. The current 10-year cycle is set to expire on June 30, 2014.  Since the last GPT review in 2003/2004, the global economic landscape has changed considerably, and significant shifts have taken place in the income levels and trade competitiveness of many developing countries including, among others, China, India, Brazil, Singapore, South Korea, Thailand, Malaysia and Indonesia. A comprehensive review is now underway to ensure that the GPT program remains appropriately aligned with Canada’s development policy objectives.

Further to objectives set out in the 2012 Federal Budget, Canada’s Department of Finance is proposing that preferential duty status be removed with respect to goods shipped to Canada from 72 countries, effective July 1, 2014.  These are countries that either: (a) are classified by the World Bank as high or upper-middle income economies for the last two years; or (b) have a 1% or larger share of world exports for two consecutive years according to World Trade Organization statistics.  Based on these criteria, it is the Government’s intention to withdraw GPT eligibility from the following countries:

The practical impact of these changes is that importers of goods into Canada may pay more duty on goods that they import from countries losing their GPT status. However, imports from the above-listed countries that are entitled to other preferential tariff treatments (e.g., under free trade agreements) will continue to be eligible for tariff preferences under those tariff treatments.

In January, the Canada Border Services Agency (“CBSA”), which manages compliance with the Tariff Classification, Valuation and Origin programs, published its semi-annual list of trade compliance verification priorities.  The current targeted priorities are: 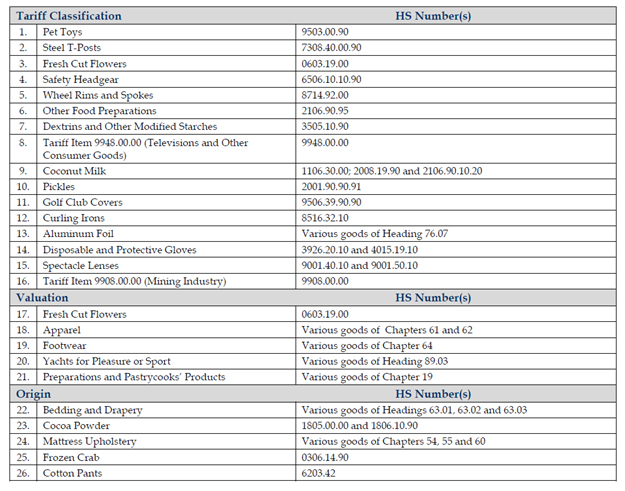 CBSA verification targets are based on ongoing risk analysis.  Importers and exporters of goods into and out of Canada and, in particular, those who trade in targeted goods should review their customs policies and practices to ensure compliance in advance of a possible verification audit by CBSA.  Any incidences of non-compliance may then be corrected or disclosed voluntarily so as to minimize and/or avoid potential liabilities, including penalties.

For further information in respect of any of the above, or for any other commodity tax, customs or international trade related matter, please contact the writer or any member of Miller Thomson’s International Trade, Customs and Commodity Tax group.

The blog sets out a variety of materials relating to the law to be used for educational and non-commercial purposes only; the author(s) of the blog do not intend the blog to be a source of legal advice. Please retain and seek the advice of a lawyer and use your own good judgement before choosing to act on any information included in the blog. If you choose to rely on the materials, you do so entirely at your own risk.